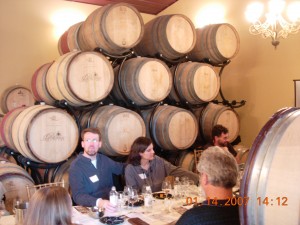 I knew the day would come, but I was pushing it off as long as possible..after 14 years, over 1,000 wine tastings, 200 cooking classes and dozens of specialty culinary events (Unique Food and Wine Festival, Chorizo Making class, etc.) would I give up TasteDC?? I knew some current facts:

The game had changed post 2008 Recession:
People spent their home’s future value – the ’08 Recession in a nutshell..banks were lending against a home’s equity..or estimated equity..a bubble..yep, it burst, go figure! When you run a small tasting event business, you need to focus on high margin, low volume events – in other words, lots of small wine classes, cheese tastings, and an occasional mini-festival. I never reached Big for the large events preferring to stay with a small staff (often just me and part-time help!) and slowly increasing the number of events. From 1997 to 2007, TasteDC went from organizing one event a month to as many as fifteen a month. When the bubble burst, people didn’t want to splurge – no one wanted to act like they had any disposable income, it just wasn’t the thing to do. My business dropped by over 50%..

Perceptions of value had changed:
In 1999 a wine dinner was something pretty unique and unusual – wine lovers were still a rarified group who often spoke in a language that no one understood. Wine was prestigious, intellectual and sophisticated and the people who drank it often travelled around or had lived abroad, were college educated and possibly even a bit snobbish. Wine dinners – defined as multi-course seated meals with at least one wine paired per course (but often 2 or more wines per course!) and normally a wine presenter discussing the pairings were relatively expensive – a 4 course wine dinner at a fine dining restaurant would cost you $85 to $150 per person inclusive of tax and tip. Believe it or not, many of these dinners sold out at 35+ people and there never seemed to be enough inventory of this kind of event.

Over time, wine became less prestigious and more of a daily consumable – this is actually a good thing. No longer is wine placed on a pedestal, it’s something you can pick up for a meal at the local grocery store or 7-11 and even casual dining restaurants normally carry at least 20 different kinds of wine in the DC area. Economically speaking, wine dinners have actually gone down in price and consumer perception of value – today, a 5-course wine dinner is often under $100 per person, and many of them barely get ten people to sign-up.

And recently, wine dinners are being replaced with the newest premium beverage to hit the DC Foodie scene – craft beer dinners. Most craft beer dinners are 5-courses and under $70 per person inclusive of tax and tip. Craft beer is perceived to be more approachable and fun than wine, so these dinners are often raucous affairs with a younger more urban crowd. Frankly, these dinners are refreshing to the wine dinner scene which seemed to be constantly inundated by the new rich who just wanted to make sure that everyone knew about their newly built wine cellar in their McMansion and the value of their recent stock option sales. Beer is real, or as I often here quoted “It’s just f***ing beer!”

The Groupon Effect:
This only occurred in 2010 or so, but has had a huge impact – when Groupon, LivingSocial and other online coupon companies began to discount restaurants and stores, it was only a matter of time before events and promotions also began discounting. I makes sense – these sites have millions of potential users and they can really bring new customers. The problem is primarily two-fold: the cost of “grouponing” and the “wait and see” attitude it creates.

If your event is say $70/person, then Groupon will suggest 50% off, so they will sell your ticket at $35/person. Groupon makes money by taking 50% of YOUR HALF, so that means you net $17.50 (LivingSocial and some other sites often don’t take as high a percentage). You can see that as a gain of new consumers and some money, but normally an event doesn’t have higher than a 50% margin, and often lower. Events make money once their fixed costs are covered – stating the obvious. Some of an event’s cost is often covered by corporate/retail sponsors, but in a slow economy, these sponsorships are hard to come by – event tickets are the main income..so how do you make money at $17.50/person? Good question..

I know I’ve only touched the surface of this subject, but the bottom-line is that the ROI on tasting events – the wine classes, cooking classes and other tastings that TasteDC specialized in – has become so low, it’s often negative. Will it ever come back? Who knows..Is TasteDC a dead business proposition..well, not quite yet, there is an alternative business plan, and no it is not a discounting concept, stay tuned..

3 Responses to “The Grouponater Effect”