Archive for the ‘Finicky Eaters’ Category

Cilantro: Some Love It, Some Soap It!

A friend of mine on Facebook Shana Glickfield recently posted that there are 2 kinds of people: those who like cilantro..and those who despise it!

I’m actually a person who didn’t originally like it because it reminded me of soap, but over time with the right dishes such as Latin and Mexican cuisine, I actually began to enjoy it – I even still get the soapy flavor and I’ve begun to love it, even look forward to it! I used to do cooking classes at Odeon Cafe in Washington, D.C. and the Moroccan owners actually preferred to make Italian cuisine with the North African influence of using cilantro in place of Italian parsley.

The video above is from Pro Chile and the two seafood dishes – 1 is a ceviche and the other is a shrimp with avocado sauce – both have tons of cilantro. I think the secret of enjoying cilantro is that it melds with other flavors and spices so well, but can be a bit overwhelming to the palate by itself – I can eat fresh parsley right off the stem, but not so much with cilantro – the latter does better with salt, sweet, sour and spicy flavors like vinegar, chiles, onions and ginger. Both Latin and Asian cuisines benefit from it’s herbal notes and that touch of soapiness!

OK, so you’re one of the people who doesn’t taste the “soapy” (or you just like the soapiness..)- here’s an additional article from the NY Times about how people taste and some of the instincts and survival background – Cheers! 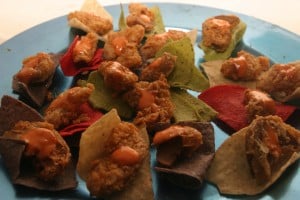