I attended Cheese Connection this past weekend in Miami and met one of the most fascinating people I’ve ever met in the cheese industry before. Veronique Richez-Lerouge is the President of “Fromages de Terroirs”, a French organization dedicated to protecting France’s authentic and original cheeses the way they were originally produced – made with raw milk the traditional way. She held the seminar The Battle Between Raw Milk and Pasteurized Milk: the French Affair which discussed the changes going on in French eating habits relating to cheese. Being French, Veronique is a product of the French culture: food and enjoyment of food and sensual pleasures are very important to French culture. In America, Farmer’s Markets are expensive and somewhat elitist, in France they are the norm for shopping for ingredients. Children there are brought up to identify with food as part of culture – it’s a chance to taste artisanal French made products as well as a time to bond with family. Sitting down at a meal for an hour or more is revered, and the concept of “eating on the run” is looked down upon in the overall culture. Things are of course changing rapidly.

Although the discussion was concerning one specific change in France – while prior to WW II, virtually all French cheeses consumed in their country were unpasteurized raw-milk cheeses, today only 7% are raw-milk – Veronique’s message was much more of a global reality: as science and technology change our perception of “good” vs. “bad” for you foods, we are mesmerized by a form of bad thinking, what she calls “sanitary logic”. Sanitary logic is the concept that all started with pasteurization. Pasteurization was originally a way for the wine/Cognac industry to produce a product that didn’t spoil. The scientist Louis Pasteur discovered that by raising the temperature of a food product to a certain level, all the bad “spoilage” microbes would die, thus creating a food or beverage that could be edible for a longer time. Applying this logic, milk from pre-industrial farms that was brought into the cities of the late 19th century often held bacteria that could cause (and often did) serious diseases to raw-milk consumers. By simply heating the milk to almost boiling, the “bad” bacteria could be killed and the milk could be consumed without causing disease. Since for thousands of years disease and microbes were misunderstood, Science became modern man’s hero, and now we could blame some if not all of mankind’s ills on these little bacterial demons – sanitary logic.

But there is a serious problem with scientific thinking when it pertains to food, and arguably, with life in general. Just as there are “bad” microbes and bacteria, there are “good” ones..actually, life-giving bacteria that are necessary to human and most life forms. Without bacteria, we humans can not digest our food. Within our digestive systems are untold billions of little microbes that help us not only to break down food, but to synthesize nutrients from the food, air and water that we consume. And then there’s our immune system – yes, the “good” bacteria/microbes actually help us fight off infection from the bad guys. As Veronique mentions in this video, our “body needs them to protect” against disease and infection – today, we often see this explained in the modern media as “pro-biotics”, the gut bacteria that defend our bodies against bacterial attacks.

My favorite quote from Veronique is “if you eat too much dead food, your body is dead” – no matter how many vitamins or good nutrients a food has, if you kill the good bacteria, you are putting “dead” food into your body. According to Veronique: “pasteurized cheese is a dead product” and logically, so is pasteurized milk or most pasteurized products. When I asked her about the reasoning behind pasteurization – it increases shelf life of food and in the case of raw-milk cheese, can prevent people from getting diseases such as Listeria, she commented that “pasteurized cheese is more fragile” than raw-milk cheese! Very few people get sick from raw-milk cheeses every year, but many do get sick from pasteurized cheeses. This may be true for many reasons, but one possibility is the quality of pasteurized milk in our food supply – dairies mix milk from cows from diverse regions and bad milk can be made somewhat drinkable by pasteurization – with raw milk, you can’t fix the problem with science, so you are forced to use milk from healthy cows and under very favorable conditions.

As always, you must draw your own conclusions, but what I took from Veronique’s message is that food is alive and by “killing” it with chemicals, heating, over-processing, de-naturing or other methods readily available to the scientific community, we are at a minimum reducing it’s value to our body and thus starving ourselves of good nutrients. There are many strains of Lactobacillus that our body needs, specifically our immune system, and if we don’t get them in our bodies, we can not protect ourself from the bad microbes. The controversy really stems from one idea – where ever there are bad microbes, good ones are nearby..how many times have you heard when traveling to a foreign country that it’s a bad idea to eat their food because our digestive system won’t be able to deal with the bad bacteria. Even medical professionals today are reducing the amount of drugs and antibiotics they prescribe because the can kill the good bacteria in our systems. You hear about so many food allergies and sensitivities today from gluten to nuts, but it’s very difficult to avoid these foods – do we need to? I’ll pose this – could it be as one medical professional claimed “we need to allow our children to have some dirt in their diet”? Is our fear of the food system actually perpetuating our illness and disease? Do Americans really get insufficient vitamins and nutrients or is it simply that they don’t have in their guts the necessary bacteria to perpetuate a healthy body?

Veronique takes a very negative view of the American diet as well as what is going on in France – the consumption of more industrial/processed foods. Interestingly enough, her activism has taken on a very controversial methodology – she created a “girlie calendar” (yes, that is the English translation of her French!) with regular women wearing scanty clothing and promoting raw-milk French cheeses! 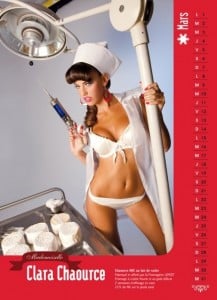