20 For 20 at Redwood – Wine Tasting Hits the Numbers

Sometimes You Get More Than You Expected at a Wine Tasting..

I’ve been to alot of low-priced wine tastings – and normally, the price of the event and the quality of food/wine/ambiance match – but not this time! Redwood Restaurant in Bethesda, MD which is right in the heart of the burgeoning retail sector on Bethesda Ave (anchored currently by Barnes and Noble) is a beautiful high-ceilinged restaurant with plenty of redwood (surprise!) and glass fronting on a lovely outdoor open-aired pedestrian atrium.

The Setup:
Although there was not actually a private area for this walk-around tasting (no seating) it was in the back of the restaurant and began at 6 pm before the hordes of diners and bar loungers came in. It was a simple basic setup of regular tables with wine reps pouring a selection of their wines at each table based on a theme: Table 1 – South Africa, Table 2 – Italy, Table 3 – France/Germany/Spain and Table 4 – Argentina/Australia/California. Each table had 5 wines, so that adds up to 20..the 20 wines for $20 title..but really, this event had more: generous hors d’oeuvres! Unfortunately, I couldn’t take photos of the food, but it was well-prepared, presented by servers with a napkin (nice touch..funny how important a napkin can be when you are trying to drink wine in a glass!).

The Wines (my apologies for forgetting vintages!): Since I find reviewing wine boring and frankly hard to follow, I’ll focus on what caught my attention. I started at the South African Table with wine rep Matt Leemhuis of Cape Classics, a well-known importer from that region. Two wines were really noticeable – the Kanonkop Pinotage and the Detoren Fusion V, both over $50 retail in Montgomery County. Pinotage is a funky, earthy smokey kinda wine, but it goes great with food. Detoren was it’s polar opposite with a Bordeaux Blend that was luscious rich black fruit and soft tannins and extremely accessible.

At Table 3 which was a mix of European wines, the Leitz Dragonstone Riesling really stood out – all the things I like about a German Riesling with a hint of petrol, but lots of minerality and acidity to balance a bit of sweetness – although Rieslings are great food wines (think Asian food), this one was actually so vibrant on the palate that me a Red wine drinker was just savoring it!

At Table 2 Italy, there was a very interesting white, but I was really enjoying the Argiano Non-Confunditor which is a blend made of Cabernet Sauvignon, Merlot, Syrah and Sangiovese – a Super Tuscan wine, and it actually tasted like a blend of Old World and New World – earth and soil from Italy, but roundness from Cabernet – a really interesting contrast!

Table 4 had contrasting Malbecs: Finca Sophenia Malbec Reserva vs Voodoo Moon Malbec – the first was pretty traditional with a touch of rough tannins and earthy overtones, while the latter was all perfume and weirdly candy-like – unexpected but delicious!

Food: I didn’t try everything, but all hors d’oeuvres were passed – the chicken wings were especially good and enormous – they were in a sweetish BBQ sauce that was decadently good, thumbs up (I ate them to the bone!). The fried foods were served hot, an although the pimento cheese biscuit was only OK, I was overall impressed by service and the food in general.

Conclusion:If they do another 20 for 20 event, snap up a ticket – it’s a great deal, great food and really decent setup and service. If I could Yelp this event (I probably could!), it would be 5 Stars, no caveats. Forgot to mention..even the wine glasses were very nice and big allowing for good swirling..Cheers!

Mind Your P’s and Q’s – Wine Tastings at Embassies 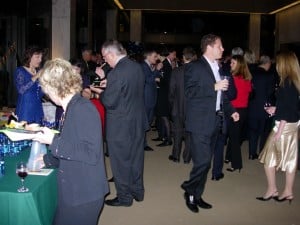 Living in Washington, D.C. has many benefits, especially the fact that almost every country in the world has an Embassy in our city – and many either organize or allow for events such as wine tastings. I’m not exactly sure which was my first Embassy wine tasting experience, but I do remember sometime in the 90’s attending an “Opera and Wine Tasting” at the Spanish Embassy..or was that the Spanish Ambassador’s Residence? What I remember is that it was very dressy, the Ambassador was not there, and the opera singer kept forgetting the words to the opera..oh, and there was plenty of wine to sample! Since that time, I personally have organized over 40 events at Embassies through my company TasteDC and I’ve learned quite a bit about the do;s and dont’s of organizing an event at an Embassy?

1) Choose Wines from a Variety of Growing Regions in the Country
This seems like common sense, but unless I’m organizing a region specific event like the Champagne event or the Beaujolais Nouveau events I’ve held at the French Embassy, it’s best to have a broad cross section of wines from various regions.

2) Hire a Caterer Who Understands the Cuisine and Preparation
I’ll tread on this one lightly – I once hired a French caterer to prepare the cheese fondue at a Swiss Embassy Chocolate, Cheese and Wine Event..and the fondue clumped together! Wow, did the Embassy official who looked at the mess get upset – it was also very hard to get on people’s plates, oh well. It also took us almost 2 hours to figure out how to turn on their oven in the basement kitchen, it needed an old-fashioned match to light the pilot..I could go on and on about mis-haps with Embassy kitchens (food ending up in the purses of Embassy staff, chefs not showing up,etc..), but I also want to include that most of the time things have worked out well. If you’ve ever organized a large event, things will go wrong, that’s to be expected.

3) Be Ready to Bear the Financial Risk
After 10 years of organizing these events for 200+ people, I just decided that it took too much energy to continue to run these hectic events – not only are they time-consuming and difficult, but I was at financial risk. Normally, an embassy charges some kind of rental fee, and of course, the caterer, food, wine and staff are all fixed costs, so many events don’t even break-even until 100 tickets are sold. When I first began holding events at embassies in 1998, there were very few organizations doing so for profit. Of course, once my business took off, every other event promoter in DC began to contact the embassies and do the same or similar events. Sales declined, prices came down, and frankly the amount of sweat and effort it took to make a successful event just didn’t make sense.

OK, this was fun going down memory lane..I think I’ll write more about Embassy tastings in the D.C. area – if you are curious about what it’s like to work with an Embassy, leave me a comment or email me – oh, here are some more photos of an Austrian wine tasting at the Austrian Embassy – – Cheers!