I hadn’t been to cooking class at Sur La Table in Pentagon City in a long time – maybe 6 years, so it was time to visit one of the original recreational cooking schools in the Washington, D.C. area. The class I took was hands-on – The Best of Szechuan Cooking – and was a great excuse to get my wok skills going again. Wine isn’t allowed to be consumed..so I was bit hyped on tea, but I guess change is always good! 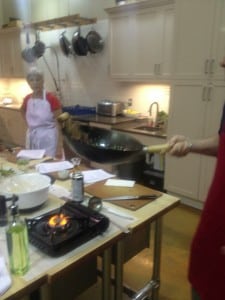 I flipped for this Dish!

I actually haven’t owned a wok in over 10 years – in college, I learned how to use a wok from a guy who demonstrated its use in a class on public speaking – he made it seem so accessible, that I used to make alot of my meals in college and grad school with a wok. What I really enjoy about this type of cooking is that once all the ingredients are prepped, the actual cooking isn’t fussy, you just basically add the ingredients at high heat, keep it moving and eat! 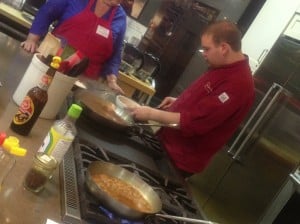 The class was taught by Joe Lipinski who’s title is “Resident Chef” but it really should be Head Culinary Entertainer and Coordinator – he had an excellent rapport with the group and it was obvious he enjoyed engaging the group. DC is a tough town for strangers to meet – intense is a word I often hear for the personality of Washingtonians – and he did a good job at letting people sort of entertain themselves while keeping the cooking in the direction it needed to go. Alot of corporate recruiters and managers could take a lesson from this guy! 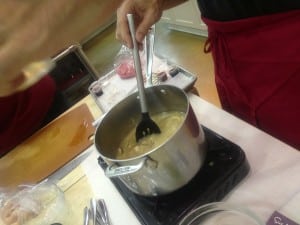 Hot and Sour Soup:
This was a very simplified recipe for the dish which can include strange ingredients like wood mushrooms, black fungus and wild lilies – in this recipe, those were replaced from a very available ingredient: shiitake mushrooms. The key to this dish is to balance the hot (which came from hot chile oil) with the sour – rice vinegar worked for this dish. If you balance those two items, you can actually use any ingredients that add heat and acidity like hot peppers for heat and lemon, lime or various vinegars to balance the flavors. Since the pork is really just being simmered in the soup, another animal protein like chicken can work too..oh, and this is an excuse to add tofu to your diet which adds a fun texture to the soup!

Noodles with Ground Pork (Ants Climbing a Tree)
I love noodles, but when you go to an Asian market like H-Mart or Grand Mart, the choices can be overwhelming (and quite intimidating!) – so it’s always nice to get some hands on practice. In this case, the “tree” in the dish is mung bean noodles which were pre-boiled and cooled so they could be added to the dish with the “ants” ie. seared and browned ground pork, to create a wonderful meshing of flavors.

Bang Bang Chicken
Essentially, broth boiled chicken in a chunky peanut sauce – what makes this dish interesting and delicious is really the cold lettuce leaves and cucumber and carrots against the savory chicken. This is a dish that you could either forget about or relish for a fun outdoor BBQ/picnic type of event or an easy to throw together leftover dinner. What’s astonishing is that little changes in your dish like crispy lettuce (or could you make this into a sandwich with bread?), crunchy veggies – which could be replaced with a kimchi or some kind of relish, could actually make this a fun variable dish that could change with your moods! 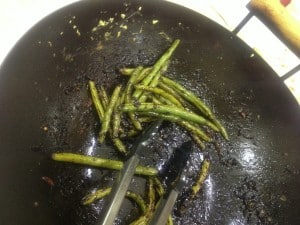 Dry-Fried Green Beans with Chile Sauce
Essentially this is some type of green been (traditional Chinese long green beans or vericots vert work just fine as well..), seared and blistered at a high temperature with lot’s of flavorful ginger, garlic and chile paste to create a sticky, hot sauce that makes this either a hot side dish or a fun cold dish that could be added to cold lettuce or even possibly a little feta cheese for a fun refreshing summer afternoon. This is a go-to dish – especially because I’m not a fan of boiled green beans, and they seem to be so prevalent at the Farmer’s Market..