This a video from a TasteDC Exotic Chocolate Cooking Class with Rob Kingsbury discussing the tempering of chocolates. Tempering is a term both used in chocolate and in food preparation, but the word is used slightly differently for each purpose. In food prep, when you use the term “tempering”, it’s often associated with tempering eggs – if you add raw eggs to a hot liquid, they will scramble, which is usually not the goal, you want to incorporate eggs in an emulsion evenly throughout. Rob, who owns both ACKC on 14th St., in Washington, D.C. and Del Ray, VA, as well as Kingsbury Chocolates in Alexandria, VA, mentions how his mother made Chocolate Cream Pie by tempering eggs. When it comes to chocolate, tempering is about creating shiny hard chocolate which is snaps when you break it or bite into it. This is caused by the crystalline structure of the cocoa butter and solids together, for an intense explanation check out Cooking for Engineers on Chocolate Tempering. If you don’t temper chocolate, it just doesn’t have the appearance and crunch that most people like.

Here’s the information from the TasteDC class:

Oh, and plenty of wine was served – Port and dessert wines go with chocolate, but medium bodied reds like Merlot do nicely.

Elaine Boland is the type of strong-willed woman that inspires others to sit-up and notice. She’s a “back to the farm” individual who came to the realization almost a decade ago that you are what you eat, and the ill effects of eating an overly processed diet become obvious in our health.

Above is a video of her on her farm Fields of Athenry in Purcellville, VA. Elaine has an unusual business model – she only sells from her farm and eschews all farmer’s markets. If you want her meat, you have to go to her to get it! I visited the farm in 2008 and was amazed at how balanced everything seemed – her dogs watched over the farm and protected the animals from predators so that they could feel secure and produce healthy meat! Yes, to some this seems ironic, but a farm animal has a duty: some to protect, some to make aware, and some to be fattened to be eaten.

Enjoy the video and if you get a chance, you can order (pre-order please, Elaine butchers just enough for her customers!) from Fields of Athenry and enjoy some of their great meats!

Working with Fillo – Spanakopita and Tiropita

TasteDC held a Great Greek Classics Cooking Class at Veranda on P Restaurant in Washington, D.C. on Saturday, June 6th, 2009 and this is a short video of using fillo in greek pie preparations. I grew up in Harrisburg, PA which has a large Greek community, so spinach and cheese pies (Spanakopita – Tiropita is basically the same filling without the spinach) where readily available. When I think about the buttery flakey fillo crunching in my mouth and the creamy, salty spinach and cheese oozing onto my tongue, frankly it brings back great memories! I was a bit critical of the food I grew up with in Harrisburg in my book I Drink on the Job but I was very fortunate to have had a great selection of restaurants run by Greeks to enjoy a mix of American and Greek cuisine. Lamb and Moussaka were often on the menu at these little neighborhood restaurants which opened up my awareness to real food.

This is the very basic recipe for Spanakopita we used in the cooking class – you can vary the cheeses if you like. The video is more for demonstrating using fillo which I think scares people a bit to cook with because it’s temperature sensitive and pretty easy to break while using. Give this recipe a try – enjoy!
Spanakopita Recipe
Ingredients:
One box of fillo dough
one box of frozen spinach
8 oz ricotta cheese
one lb of feta cheese
One bunch of spring onions (Chopped)
Dill (a small bunch)
one or two eggs
salt (to taste)
white pepper (for seasoning)
Olive oil
Butter (melted)

Method:
Defrost and strain well the spinach. Place all the ingredients (except the fillo) together and mix. Cut the fillo in three or four long rectangles like lasagna pasta. Take one strip of fillo and place a small amount of the mix on one of the corners of the fillo. Fold the fillo to form a triangle and use a little of the melted butter to keep it together during cooking. Brush a baking tray with butter and place the finished pies on the tray. Place it in the oven for 15 to 20 minutes at 350 degrees UNTIL it’s only brown on the outside, then lower the temperature to 300-325 degrees and cook until the interior is crispy, don’t overcook.

P.S. You can decide the shape and the size of the pie.

Living the Dream – the New Farmer

This was a fun interview I did at the Taste of Atlanta in 2010 with a great lady – Belinda Wernau, one of the owners of Little Red Hen Farm Belinda is part of the renaissance of farming as more than just a way of life, but a philosophical “back to nature” movement. Belinda has a full-time job outside of farming in a technical industry as a chemical engineer and she has 4 kids to raise as well. Somehow she balances her life and provides an idyllic setting for raising chickens for their meat and eggs and she has become financially successful at it, beating her financial expectations by becoming profitable in under 3 years.

Enjoy the video, it’s enlightening. Is working on a farm really living the dream? If you come away with a more realistic understanding of the ups and downs of running a small farm, then this post was successful. It’s OK to romanticize leaving your job and having a better, simpler life in balance with nature, but that’s probably not going to happen for you (or anyone for that matter!). There is a satisfaction to working with your hands and to producing something tangible that people can appreciate. In a world where 90% of people work indoors for over 40 hours a week, sitting in front of a computer, checking email, meetings, cell phones, etc. appreciating the realness of an animal being raised and the associated pitfalls of nature seems to resonate with many. Personally, I’d rather just enjoy the fruits of this labor, but if you have a hankering for going all the way, talk to a farmer – you’ll be surprised what you might discover!

This video comes from an “I Love Crab” cooking class I organized at TasteDC in the Summer of 2007 with Chef Brian Boots of Elegance ala Carte.

In the Maryland/Chesapeake area, we love soft shell crabs, here known simply as “Softshells” – you can buy them frozen, but I think they come from Vietnam and its actually a different species of crab, but for a few months in the Summer every year you can get fresh ones. In order to clean a softshell, you want to cut the lungs out..and cut off the head with shears/scissors..yes, I’ve seen them served with the head on, but they taste better with it off! When it comes to wine, crab meat is very sweet and light, so a crisp white wine like a New Zealand Sauvignon Blanc works great, but a cool pilsener works too – generally throw out the rules with softshells, especially because they’re almost always fried in a rich fat and that adds weight and flavor.

Here’s some info on how to clean Softshells from Cooking Light – Cleaning Info.

Cooking Directions: In a skillet over medium high heat, heat olive oil. Add the shallots, ginger, and garlic. Sauté for 3 minutes. Add the mango; continue to sauté until mango is tender. Add the Mirin and guava nectar. Reduce by half. Add the vegetable stock. Bring to a boil and reduce to form a glaze. Season soft shell crabs with Old Bay. Add to the glaze and cook until crabs are done, about 5 minutes. Add the green onions, basil and salt and pepper. 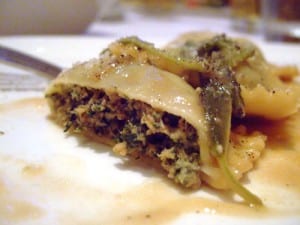