Charlie Had A Little Lamb..

Aleks over at Veranda on P on 11th and P St., NW in Washington, D.C. invited me to come over and try his spit-roasted lamb – this isn’t actually the photo, but it looked almost exactly the same sans lamb head. I showed up a bit on the late side at about 7:30 after the “good parts” according to Aleks had already been eaten – the leg thigh, and other meaty portions..I actually thought that was great because that meant the flavorful stuff was still available – kidneys, lungs, heart, liver and gut! Unfortunately, Aleks gave away the kidneys, it would have been my first lamb kidneys – I’ve had beef kidneys in the past. After having a few Hoegardens, fresh cooked stewed liver and lungs were served – a very simple preparation and very tasty, although there is that slightly gritty/muddy/meaty taste that I guess you have to acquire.

I was sharing this dish with an Ethiopian gentleman named Tesfera – he told me that eating the innards of a lamb is a ritual in his country. He mentioned that he occasionally cooks for himself some liver, heart and other good stuff with just a bit of sauteed onions and a little pepper, maybe 15 minutes of cooking. When I asked if heart didn’t stay a bit chewy with such a short cooking time, he said that was part of the pleasure! Interestingly, he was drinking Cognac during the whole process – he said that in Ethiopia there is a honey wine (I’ve had it), but that he much prepared Whiskey or Cognac. This is just another example of how customs cross borders. Italy had major influence on Ethiopia and Tesfera explained how the best Ethiopian coffee was prepared in Italian Espresso machines.

Call this another multi-cultural experience, but this is exactly why it’s fantastic living in an international city like Washington, D.C. – I get to meet people from all over the world and break bread with them. Now, if we could all stop fighting over mundane details and politics, and focus on learning and friendship..

I am – Charlie “I Drink on the Job” Adler

The “Cheesecake Factory Effect” and other Food and Wine Trends 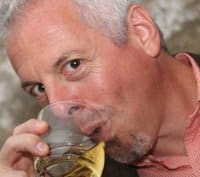 Charlie Adler – Drinking on the Job!

I haven’t forgotten my dear Blog readers..just needed some Summer time off to re-visit, re-invent, and re-think; I think everyone deserves a little time off for reflection. Nothing earth shattering, just a chance to travel a bit (short soul searching trip to Durham and Nagshead North Carolina, gotta tan out of the deal!) and look back. Conclusion? Sit tight, there are changes going on in the U.S. in general and in the food and wine industry as well. Here are some ongoing and new trends I’ve noticed:

1) Restaurant portions are getting larger..and larger
I was at the Fancy Food show in NYC and mentioned to an exhibitor how I don’t enjoy going out to eat at restaurants as much as I used to because the portions are so large – I hate wasting all that food or taking it with me. The reply was interesting..they asked me if I had seen the size of the new dinner plates being offered by many restaurants, they were on display at a restaurant supplier’s booth – they were Serving Tray Size! Call it the Cheesecake Factory effect, but many existing chains as well as standard American restaurants will be using bigger entree plates. Conclusion: the American waste size will just keep getting bigger..

2) The Food Truck Craze is Amazing!
I’m by no means an expert on this, but I think it suggests a longer term trend. If more and more food trucks hit the streets, then restaurants are going to have to compete on price, value and variety as well The trucks offer such a diverse array of foods, we even have a Korean Taco food truck on the streets of Washington, D.C. People often wait 45 minutes or more when they could easily sit in a restaurant, get service and finish their meal in the same amount of time. Why people prefer this method of food delivery is hard to say, but one reason is most likely the rare chance for people to physically interact. As we get more computer and technology oriented in our daily lives, there will be more need and excuses for real human contact.

3) Craft Beer is Hot
I somehow missed this trend – pretty ironic when you consider that I make a living organizing wine and food events over at TasteDC. Again, what causes a trend like this is hard to determine, but I have an inkling that it may be a reverse trend. Craft beer attracts slightly more men than women overall, but it’s not a significant percentage difference, or at least it isn’t lopsided. On the other hand, the number of women’s events in the DC area is astonishing – every week there are many fashion, women-only networking, plus the fact that stores offer much more selection for women – I even found a yoga store that is exclusively for women! All men have left is sports, restaurants and..beer! With more and more dollars being spent by women FOR women (vs. as gifts by women for men), expect to see more “male oriented” food and beverage trends. Craft beer fits perfectly because most boys/men are brought up with beer, and craft beer’s demographics are higher income, better educated and more traveled.

I’ll keep searching for new trends, but hopefully this gives a snapshot or taste of what’s going on in our world of food and beverages – Cheers!

OK, so I haven’t posted to my Idrinkonthejob.com Blog for over a month, blah, blah, blah! I had nothing to blog about – or at least, I felt there was nothing that interesting to tell you or any of the Blogosphere. I did attend a 3 day Cheese “Master Class” at Artisanal Cheese Center in NYC with Max McCalman – it was a great experience, I learned ALOT about cheese! Tasted cheeses, learned about affinage, tasted cheeses, paired wine and cheese, tasted cheeses, on and on..excellent, really loved it! Used AirBnb and chose for $175/night a pretty lux place on 10th Ave and 38th which was within walking distance of the cheese center…

So why am I writing this post and entitling it “Zen Cucumber”..something just occurred to me..

In a topsy-turvy world, where I can barely make a living doing my job, the economy sucks, people around me everywhere, but particularly in DC are constantly tense and on edge (more on that!), I feel calm, cool and collected..like a cool cucumber..even balanced..I get it..I am the Zen Cucumber..

Fear of..WORDS!! Sticks and stones..you finish it. Collective consciousness? I’ve been told (who?) that I shouldn’t generalize, that I shouldn’t pass judgment, that every person is unique..and yet, we all speak a language and we all write sentences with it..so we all have the words in common, and we use them to..get what we want – ta dah!

Tense here in DC – TEnse, TENSE!! I think why does no one talk – to strangers? Are they dangerous, I mean when I comment or talk to someone in line at the grocery store, and they..stare..away..act like they’re dead..you know, right before the shark/bear is about to attack, they freeze! I’m in line at the always tense farmer’s market in Burleith (Georgetown, but north side) and I’m waiting in line balancing 5 corn cobs in one hand and holding a heavy bag in the other. The woman in front of me is paying the farmer and..I drop one of the corn cobs – plop! Before it even takes a bounce, the woman freezes – and apologizes..but she had nothing to do with it..so I wondered – why? Did she knock it out of my hand? No..OHH, I had turned into a “goof” by being foolish enough to..drop something perishable – perish the thought! I thought maybe it had touched her, so I asked “are you ok?” – no answer..another tense moment, unresolved..nothing like “No, I’m fine” and there was no attempt to rectify..just tension – Yoww! I’m going to eat the corn later, I’m sure it’s fine, maybe a bit bruised, but what about my ego?? I’ll survive – seriously..

Cool and serene as a cucumber – not a bit stressed..maybe a touch concerned, but what living being isn’t? I mean every living thing is constantly searching for his next meal. Or hers, same thing..

Not a rant, a series of observations about mostly the human condition. I can’t generalize right – so how do you interpret these words – it doesn’t matter, as long as you can translate them in your brain – you interpret them anyway you want, you can fire back at me, agree with me, or you can just let the words fade – doesn’t matter..