This a video from a TasteDC Exotic Chocolate Cooking Class with Rob Kingsbury discussing the tempering of chocolates. Tempering is a term both used in chocolate and in food preparation, but the word is used slightly differently for each purpose. In food prep, when you use the term “tempering”, it’s often associated with tempering eggs – if you add raw eggs to a hot liquid, they will scramble, which is usually not the goal, you want to incorporate eggs in an emulsion evenly throughout. Rob, who owns both ACKC on 14th St., in Washington, D.C. and Del Ray, VA, as well as Kingsbury Chocolates in Alexandria, VA, mentions how his mother made Chocolate Cream Pie by tempering eggs. When it comes to chocolate, tempering is about creating shiny hard chocolate which is snaps when you break it or bite into it. This is caused by the crystalline structure of the cocoa butter and solids together, for an intense explanation check out Cooking for Engineers on Chocolate Tempering. If you don’t temper chocolate, it just doesn’t have the appearance and crunch that most people like.

Here’s the information from the TasteDC class:

Oh, and plenty of wine was served – Port and dessert wines go with chocolate, but medium bodied reds like Merlot do nicely.

A Bit On Bordeaux..

Who says wine tastings are boring? On Tuesday, April 20th I attended a wine tasting sponsored by MacArthur’s Beverages at the Matisse Restaurant in Washington, D.C. with Jeffrey Davies, a well-known Bordeaux negociant, importer, and wine maker who actually is originally from the U.S. The event was to showcase the wines of Stephane Derenoncourt who unfortunately couldn’t make it because of the Icelandic volcano that erupted ash all over Europe and prevented him from flying into DC. This video is brief and covers some of the differences in how vines are chosen for the Right Bank vs. the Left Bank of Bordeaux. It was quite an educational experience for me as the tasting notes were extensive on the printed tasting sheet and included terms I was vaguely familiar with including microbullage and levurage

Twelve wines were tasted from a Gree Laroque 2005 priced at $20 to La Mondotte 2001 which will set you back $200 or so a bottle! There was also a special guest appearance by a winery that Monsieur Derenoncourt consults with in Virginia called Boxwood Winery – both the Boxwood Topiary Red 2007 and the Estate Red 2007 both at about $25/bottle showed very well against the French Bordeauxs – Rachel Martin, one of the owners spoke about making wine in Virginia at the event.

Oh, and for fun, here’s the video of Jeffrey on Wine Library TV:

Chocolate and Wine: A Pairing for Sweeties! 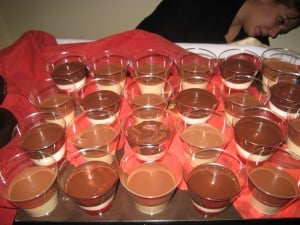 I love chocolate..I love wine..but can the two come together to make a great match?  This is the dilemma of writing a chocolate and wine pairing article – it is not a “traditional” pairing, meaning, it is neither a regional pairing (Loire Valley Sauvignon Blanc and Chevre) nor a dish pairing such as steak and Cabernet Sauvignon.  Chocolate and wine pairing was created primarily to satisfy the need for accentuating and justifying the obvious connection between being amorous and enjoying the sensual pleasures of chocolate and vino!

Actually, the pairing can work, so here’s my take on the combination.  First, the assumption is you’ll be tasting dark chocolate, in other words, chocolate with say 60% or more Cacao percent.  Dark chocolate or “bittersweet” chocolate has two components to think about: tannin (from the cacao bean) and sugar.  The basics of food and wine pairing are either to pair similar or contrasting components.  For example, since chocolate has tannin and red wine has tannin, you could pair those flavors.  The effect of pairing similar tastes is actually to lessen each, also known as “1+1=1/2”.  Take too similar “tastes” paired together and that component will be lessened.  Tannin and tannin reduce the effects of each other. This same principle works with the sugar in chocolate and the sugar in a glass of wine, again the same thing, this will ultimately make both seem less sweet.  This is a weird phenomenon, but try something basic like orange juice and a sweet morning muffin, and it becomes obvious.

If you contrast with your pairing, the most obvious is to pair a highly acidic wine with chocolate to counterbalance the tannin and/or sweetness.  In my opinion, this won’t work very well because it would be an unnecessary overload of the senses.  Plus, I’ve tried it, and it tastes pretty awful or neutral at best!

So you have a choice: you can either pair the sweetness with a dessert wine such as a French Sauternes or a German dessert Riesling or you can pair the tannin in chocolate with a red wine with tannin.  For whatever reason, many Merlots and also fruity medium tannin wines work with chocolate.  Merlot is generally medium tannin, but also has softer, lusher tannins that don’t seem to clash with chocolate.

So what’s my conclusion after evaluating the chocolate and wine pairing principles?  Frankly, it’s better to just go with the romantic mood, forget the pairing and enjoy some delicious Champagne or sparkling wine with chocolate!  My reasoning is the power of suggestion: sparkling wine suggests a special occasion, from the popping of the cork to the effervescence of the wine, and it promotes the romantic occasion.

You could play with the sparkling wine a bit by serving a Rosé which often is made from lightly pressed and fermented Pinot Noir. The best pairing might be Port which has both tannin from the red grapes as well as sweetness from sugar.  My issue with Port is that from experience, many Americans aren’t fond of it, especially at tastings I’ve held, it is often over powering to an unaccustomed palate.

Conclusion: wine and food pairing shouldn’t get in the way of a romantic moment, they should accentuate it.  Dessert wines work great with the sugar of chocolate, Port is even better, but medium tannin wines like Merlot also work well..still, Champagne or sparkling wine wines. Celebrate love and romance with a bottle of bubbly and share the moment!